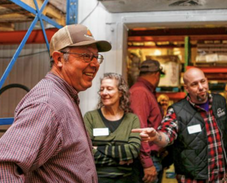 Wally Czajkowski of Plainville Farm is well-known around Hadley for his outgoing and warm personality–but also for his bora bora squash and love of pickles. The farm has been a part of the Hadley community for three generations. In 1914, Wally’s grandfather settled on a 10-acre piece of land after immigrating from Poland; there, he began growing a limited variety of vegetables in order to support his six children.
​
Plainville Farm has continued to diversify and grow, but has remained a staple of the community. Plainville Farm was awarded “Farm of the Year” in 2017 by the Food Bank of Western Massachusetts for its commitment to supporting hunger relief in its donation of over 160,000 lbs of produce. Wally also works to limit Plainville Farm’s impact on the environment through his engagement with “zone tilling,” a method that minimizes soil disturbance and encourages high levels of soil nutrients. Come by Plainville Farm and pick from a myriad of seasonal produce, including delicious broccoli, asparagus, and squash.
Boston Food Hub is a program of Boston Area Gleaners.