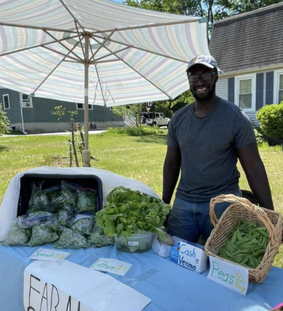 Tim Offei-Addo has had a green thumb ever since he was four, when he started helping his dad grow vegetables in the backyard. Based on his interest in the biological and political processes involved in food production, Tim worked as a fellow at the International Livestock Research Institute, where he learned about agricultural policy at the intersection of climate change, hunger, and gender equality.

​From there, Tim worked as an apprentice at the Boston Area Gleaners, where he learned about the operations of local farms–which inspired him to start expanding production from his backyard. After securing a greenhouse and four acres in Pepperell, Tim started Abrantie Farm and officially began growing his delicious carrots and ginger. He farms using a no-till bed style and with compost, utilizing aerobic bacteria to nourish soil biology. He also owns land in Ghana, where he is starting a farming operation with family and friends. Tim views farming as a way of integrating the community–whether it be through job opportunities or with produce–and is committed to providing nourishing foods to communities that may not have access to it.
Boston Food Hub is a program of Boston Area Gleaners.