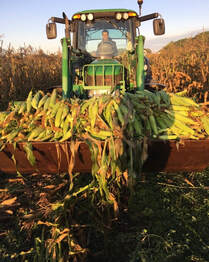 Cucurbit Farm has come a long way since the Cristopherson family established the farm in 1896. They began by only planting butternut squash and pumpkins–hence its name–but, over the course of five generations, Cucurbit Farm has expanded to include a variety of vegetables, annuals and perennials, including beats, spinach, carrots. They are most well-known, however, for their tasty tomatoes, crunchy corn, and plump pumpkins.

The Cucurbit Farm family has shown its commitment to the Acton community since its founding. During the Halloween season, Cucurbit hosts a “glow-by,” which showcases the community’s collection of jack-o-lanterns, as well as a community scarecrow contest that benefits the National Alliance on Mental Illness. The Cucurbit farmstand also makes a point to showcase other local businesses, including Jordan Brothers Seafood. Try any of Cucurbit Farm's produce and you will certainly understand why this farm is so seasoned.
Boston Food Hub is a program of Boston Area Gleaners.