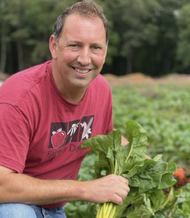 In 2006, Dave bought the land which would be Farmer Dave’s from the Lecynski family. However, Dave had been farming long before 2006. As a young adult, he worked for Bronx Farms, where he learned all about the nuances of New England farming. After college, Dave expanded his geological farming repertoire by volunteering with the PeaceCorps as a crop extensionist in Ecuador, where he worked with farmers to improve their organic agricultural techniques. Even after establishing his own farm. Dave continues to participate in international agricultural initiatives. From 2011-2014, he spent winters in the Republic of Georgia, where he taught farmers how to use greenhouses to expand their growing seasons.

Farmer Dave’s uses green manures, crop rotation, bio-controls, and the protection of beneficial insects to keep their soil and crops healthy. Dave has also worked extensively with the UMass Vegetable Team to trial various biological methods to further reduce pests. Dave has spent years perfecting his produce–try any Farmer Dave’s tasty vegetables and see for yourself.
Boston Food Hub is a program of Boston Area Gleaners.